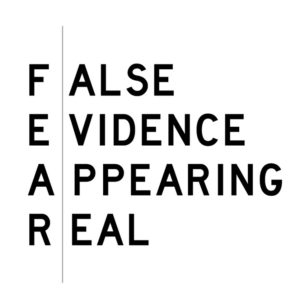 When you were a kid, do you remember being scared of the dark?

Do you remember needing a night light or asking to keep the door to your bedroom open so the hall light would help keep the dark monsters away?

In my case, it was the clothes monster.

My sister and I shared bunk beds, and we had a chair in the corner of the room. My sister would always pile her clothes on the back of that chair and when I’d wake up in the dark, in the middle of the night, I was so scared because it looked like a monster to me. (TRUE STORY, that may be one of the reasons, I became such a neat freak, no clothing monsters in my house!)

And have you noticed that in really scary movies, they always have the really gruesome and bad things happen after dark, often in bedrooms . . . Booga Booga.

When you break down the fear of the dark, it isn’t actually the dark you were afraid of, but instead what you couldn’t see.

The same holds true today in your business.

You are afraid of what you can’t see and don’t yet understand or know.

The fastest way to banish your fear is to NAME IT, CLAIM IT, and DROP IT!

Lots of business owners fear FAILURE. It’s ugly, it’s scary. But, most of them haven’t got a clue what failure really looks like, if they did they wouldn’t be so afraid.

So, let’s start with Fear of Failure. We’ve named it.

Now, to claim it, we have to define it. What does it really look like to you?

For me, I have a game I play, and I imagine if I lost everything, whose basement could I live in till I got back on my feet.

Now, in my imagination I actually picture how my life will look squashed into someone’s basement, boxes piled high, relying on their goodwill for meals and more.  I figure I’ll be able to trade housekeeping services (I had a cleaning service in college) and decorating or coaching tips for their hospitality.

Then, I start to grin because I realize how absurd that is. Even if it happened, I’d be out of there in 6 months because I have too much pride, creativity, and resourcefulness to let that last (you do t00!) Frankly, those three attributes will keep me (and you) out of that place, entirely.

So then, I find my fear of failure totally unfounded and I turn my focus to success. TRY IT!

I recently did an exercise like this with a client who was hesitating to leave his abusive marriage of 39 years.

(Yeah, business coaching isn’t all I do.) More than anything else, he was afraid of what other people would say about him, if he left.

So I told him to write down 10 phrases that he thought others would say. As expected, while there were one or two that were negative, the rest all supported his decision to leave. He named his fear, he defined it by making the list, and now he can drop it and move forward.

(Everyone deserves to live a healthy and happy life without abusive relationships.)

Okay, YOUR TURN, go ahead and write down your fear, NAME IT.

Then define what you are truly afraid of, CLAIM IT.

Then read it over and let it go, DROP IT.

I lean to the dramatic side, so I always imagine what is the absolute rock bottom worst thing that could happen, and realize pretty quickly, it totally won’t occur. I can then shift my focus to creating the best since I’ve let go of the FEAR that was stopping me.